William Paterson Ewen's work could be available for sale at public auction with prices in the range of C$10,000 - C$500,000, or even much higher. 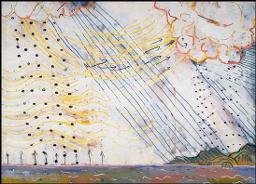 Born in Montreal, Quebec, on April 7, 1925, William Paterson Ewen was interested in art beginning at an early age. As a toddler, Ewen asked his mother for wax to make a tree and several small figures. Ewen's mother was uninterested in décor and refused to purchase decorative items for their house until Ewen was thirteen and requested artist reproductions from Jean-Baptiste Greuze and Jean-François Millet. Three years later, at age sixteen, Ewen produced his first major artistic project--a clay bust of his sister. Around this time, Ewen visited his aunt in Ottawa, where he toured the National Museum of Man (now the Canadian Museum of History). At this museum, Ewen was inspired by Japanese woodprints, and landscapes. Throughout Ewen's life, Japanese art would be important to his art making practice.

(*) Value is calculated as an average of the top acrylic painting sale records from ArtValue.ca database.
This information is not intended to substitute professional advice.
To estimate the value of a specific artwork created by William Paterson Ewen, follow some of the advice from our Valuating art page, or contact an art specialist if our automated estimate value is greater than C$2,500.