William Goodridge Roberts's work could be available for sale at public auction with prices in the range of C$10,000 - C$100,000, or even much higher. 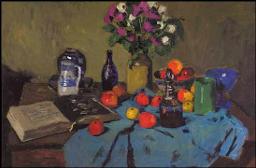 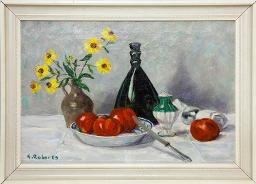 William Goodridge Roberts was a Canadian painter known for his landscape paintings and unassuming still lifes and interiors. He trained at the Ecole des beaux-arts de Montreal from 1923 to 1925 and later enrolled at the Art Students League in New York from 1926 to 1928. Taking courses with American painter and founder of the Ashcan School, John Sloan, he began a lifelong commitment to modernism. Moving to Ottawa in 1930, Roberts held his first professional solo exhibition, an annual event that would continue until the late 1960s. . In 1952, Roberts was one of four artists in Canada's first official participation at the Venice Biennale and he received one of the earliest Royal Society of Canada Fellowships to paint in Europe. An Officer of the Order of Canada, Goodridge Roberts was among the first Canadian painters to treat the landscape, the figure and still life with equal emphasis. In 1969 he was given a traveling retrospective exhibition by the National Gallery of Canada, an unusual honour for a living artist at the time. William Goodridge Roberts died in 1974.

(*) Value is calculated as an average of the top oil painting sale records from ArtValue.ca database.
This information is not intended to substitute professional advice.
To estimate the value of a specific artwork created by William Goodridge Roberts, follow some of the advice from our Valuating art page, or contact an art specialist if our automated estimate value is greater than C$2,500.