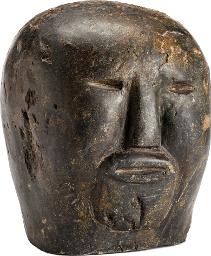 Tuna (Toona) Iquliq was born in Baker Lake. He lived for a number of years in Rankin Inlet in the early-mid 1960s and began carving there before returning to his home community around 1970. No doubt influenced by the senior Rankin Inlet sculptors Tiktak and Kavik, Tuna nevertheless developed an original carving style. In the 1976 Art Gallery of Ontario catalogue The People Within, which featured the art of Baker Lake's most important artists, curator Helga Goetz described Tuna's later sculpted figures as "moving and powerful. demanding the emotional participation of the viewer." By that point Tuna had adapted his style somewhat to the Baker Lake aesthetic. He carved steadily until his death, mostly small works that might be described as quirky and even charming - in a brutal kind of way. The small heads and faces that Tuna carved early in his career point to but do not quite prepare us for Head, a monumental, brutal masterpiece. Interestingly the work prefigures rather than follows the rugged styles of Kavik and Tiktak from the late 1960s. Even for admirers of Tuna Iquliq's art, this sculpture may come as a surprise. Like many other works by Kivalliq (Keewatin) region masters Head transcends the aesthetic canons of Inuit art. For comparisons we might need to look at the wider world of Art Brut and Outsider Art, the "styles" first championed and collected by the French painter Jean Dubuffet (1901-1985). We know the word "awesome" is much overused these days, but for the moment we can't think of a better one to describe this remarkable work. References: for contemporaneous works in a similar style by the artist see Winnipeg Art Gallery, Eskimo Carvers of Keewatin N.W.T. (1964) front cover and pp. 20, 21, 26; Sculpture/Inuit (CEAC/U of T), cat. 368. For two smaller heads see Norman Zepp, The Williamson Collection of Inuit Sculpture (Norman Mackenzie Art Gallery, 1987) cats. 40-41. See also George Swinton, Eskimo Sculpture/Sculpture Esquimaude (McClelland & Stewart, 1965), pp. 159-161, or Swinton's Sculpture of the Inuit (McClelland & Stewart, 1972/92), figs. 666, 669. First Arts: Inuit & First Nations Art Auction www.firstarts.ca

(*) Value is calculated as an average of the top stone sculpture sale records from ArtValue.ca database.
This information is not intended to substitute professional advice.
To estimate the value of a specific artwork created by Tuna Iquliq, follow some of the advice from our Valuating art page, or contact an art specialist if our automated estimate value is greater than C$2,500.