Stanley Morel Cosgrove's work could be available for sale at public auction with prices in the range of C$10,000 - C$50,000, or even much higher. 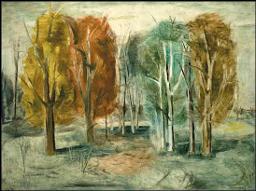 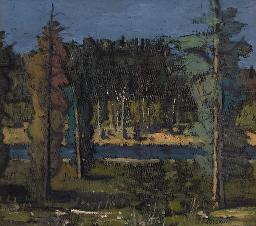 Born in Montreal in 1911, Stanley Cosgrove studied at the Ecole des Beaux-Arts and with Edwin Holgate at the Art Association of Montreal. He was quite influenced by the French painters, Braque and Rouault, and was delighted to be honoured with a four year scholarship to study in France. World War II intervened, however, and plans were altered. He chose to study in Mexico City instead, where he worked with the Fresco painter, Jose Clemente Orozco. Cosgrove assisted the artist in a major fresco commission for the Hospital Jesus de Nazareno in Mexico City. Here he learned fresco techniques which would inform his painting style throughout his life. Due to this experience, Cosgrove later worked to give fresco painting greater recognition in Canada and taught the technique at the Ecole des Beaux-Arts. While in Mexico, in addition to the fresco work, he painted still lifes and landscapes, a theme which he continued upon his return to Canada. The influence of Braque and Rouault on his painting continued to be present in style and colour. Cosgrove made effective use of outline in his portrait painting, as in the work of Rouault. His dream of studying in France was finally realized in 1953, when he was awarded with a Government fellowship which allowed him to travel to Europe. He was a member of the Canadian Group of Painters and the Royal Canadian Academy.

(*) Value is calculated as an average of the top oil painting sale records from ArtValue.ca database.
This information is not intended to substitute professional advice.
To estimate the value of a specific artwork created by Stanley Morel Cosgrove, follow some of the advice from our Valuating art page, or contact an art specialist if our automated estimate value is greater than C$2,500.