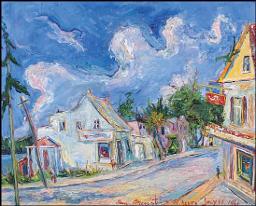 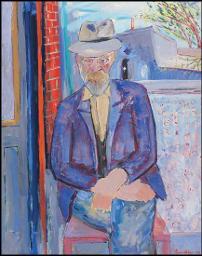 Samuel Borenstein returned to Montreal in 1939 from Paris, where Vincent Van Gogh had been an early influence, followed by the painting of Chaim Soutine with its wild colour, emotion and chaotic form. In 1942, Borenstein moved into an apartment in the Plateau district of Montreal, which is possibly the backdrop for this work. During the late 1930s through the 1940s, Borenstein painted his most celebrated portraits. Intriguingly, he painted a variety of sitters, even bringing people of different walks of life home that he had met on the street - his criteria was that they be distinctive and interesting. Borenstein used his powers of observation to penetrate into the inner life of the sitter, and as Kuhns writes, "A Borenstein portrait has a way of suggesting some primal quality about its sitter...His best portraits are studies of people who seem to be questioning their fate." In this astute painting, Borenstein captures a patience and dignity in the carefully dressed and posed old man. Perhaps Borenstein was thinking of Van Gogh's unforgettable portraits of Dr. Gachet, with his intelligent and melancholic yet gentle stance.

(*) Value is calculated as an average of the top oil painting sale records from ArtValue.ca database.
This information is not intended to substitute professional advice.
To estimate the value of a specific artwork created by Samuel (Sam) Borenstein, follow some of the advice from our Valuating art page, or contact an art specialist if our automated estimate value is greater than C$2,500.