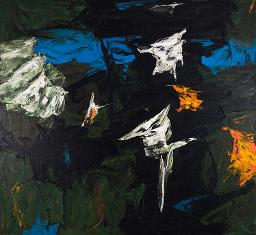 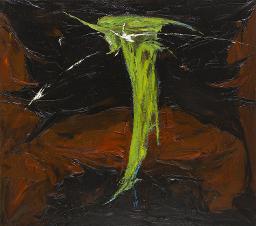 Rita Letendre was born in Drummondville in 1928 to Abenaki and Québécois parents, and has lived in Toronto since 1969. She began her career in the 1950s after a brief period of study at the École des beaux?arts de Montréal, which she left to join the Automatistes. With them, she participated in the exhibition La matière chante (1954), as well as Espace 55, at the Musée des beaux?arts de Montréal (1955). In 1959, she won the Prix de la jeune peinture, and was honoured with the Prix Rodolphe?de?Repentigny in 1960. With the early 1960s, a more distinctive style emerged, the scale of her figures expanding across the canvas, spatula strokes in quick sequence igniting colours at once explosive and dark. Quickly, Letendre distanced herself from the pictorial approach favoured by the Refus global's signatories, which she considered too restrictive; she immersed herself instead in her own personal repertoire, seeking freer forms of expressive and spiritual power. Her particular use of gesture and material lent her works a lyrical, expressive framework up until 1965, when her art was at its most "passionate, restless, and tragic," as the artist explains on the National Gallery of Canada website. Letendre's Abenaki heritage is reflected in a strong penchant for striking contrasts, alternating bright and deep colours, and acidic and mineral tones. Like a demiurge of painting, Letendre situates the drama, intensity, and energy of matter in the midst of a vibrant composition, where a timeless purity meets the beating heart. In L'espace d'un moment, created in 1962, Letendre relates a vision, an apparition that seems to draw from its ancestral origins. In Abenaki and southern Wabanaki spiritual tradition, the Gici Niwaskw is the "Great Spirit," or Creator. In his Canadian Encyclopedia entry on the Abenaki, Dean Snow writes, "the Creator is a benevolent and abstract being who does not directly interact with humans. Like other Algonquian tribes, the Great Spirit in Abenaki tales is rarely personified, and oral legends did not assign the Creator a gender."1 In Abenaki legend, this benevolent spirit was present at the origin of the world, and, according to some tales, filled the earth with life, colour, and light. Not unlike tectonic plates in motion, the black matter ruptures from its fiery ground, permitting the escape of a ray of fertile light, which shines forth in hues of lime, sky blue, and lavender, a harbinger of coming plenitude. This ray was the first to pierce Letendre's canvas, which in subsequent years would take on a drastically different style, closer to that of the Plasticiens. L'espace d'un moment resembles a later work in oil titled Atara (1963, collection of the National Gallery of Canada), painted during a stay in Israel - a faithful recitation of the patterns and colours explored in L'espace d'un moment, except for the brilliant flash that surges above the dark matter, and which lends this masterful painting its spectral force. In 2010, Rita Letendre became a member of the Royal Canadian Academy of Arts, and received the Governor General's Award in Visual and Media Arts. She won the Prix Paul?Émile?Borduas in 2016, and, in the summer of 2017, the Art Gallery of Ontario presented a major retrospective of her work titled Rita Letendre: Fire & Light.

(*) Value is calculated as an average of the top oil painting sale records from ArtValue.ca database.
This information is not intended to substitute professional advice.
To estimate the value of a specific artwork created by Rita Letendre, follow some of the advice from our Valuating art page, or contact an art specialist if our automated estimate value is greater than C$2,500.