René Jean Richard's work could be available for sale at public auction with prices in the range of C$2,500 - C$50,000, or even much higher. 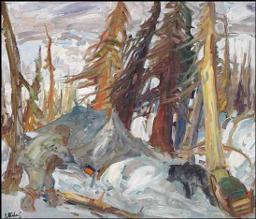 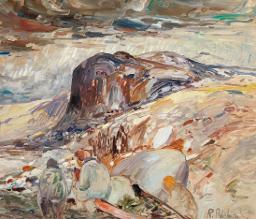 René Richard's family emigrated from Switzerland to Montreal in 1909, then moved to Cold Lake in Alberta to establish a trading post. Trips into the surrounding bush were an essential part of Richard's early life, and he even traveled by canoe down the Mackenzie River to the Arctic Ocean to join hunting expeditions with the Inuit and other First Nations peoples. Richard's father had been an engraver, and his mother came from a family of artists; steeped in this artistic heritage, the young Richard cleverly used birchbark and burnt twigs as sketching materials while exploring in the wilderness. In 1927 he moved to Paris to study art, staying there until 1930. While in Paris, he was fortunate enough to be mentored by the Canadian Impressionist Clarence Gagnon. In Trappeurs, Richard captures three figures crouching behind a rocky slope with their canoe. In the distance, a mountain rendered in fluid brush-strokes of deep violet and umber dominates the landscape, while the sky churns overhead. Richard's unique background lends authenticity to his works, and Trappeurs is an outstanding example of the imagery for which he is best known.

(*) Value is calculated as an average of the top oil painting sale records from ArtValue.ca database.
This information is not intended to substitute professional advice.
To estimate the value of a specific artwork created by René Jean Richard, follow some of the advice from our Valuating art page, or contact an art specialist if our automated estimate value is greater than C$2,500.