Pitseolak Ashoona's work could be available for sale at public auction with prices in the range of C$2,500 - C$5,000, or even much higher. 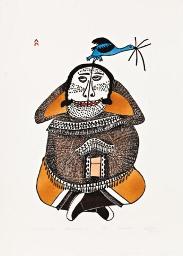 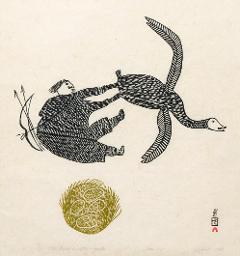 Pitseolak Ashoona was an Inuk Canadian artist admired for her prolific body of work. She was also a member of the Royal Academy of the Arts. After the death of her husband at age 40 from a viral sickness, Pitseolak raised four of their children and she eventually turned to art to help ends meet. Pitseolak Ashoona was one of the first artists in the 1960s to make drawings for the print studio in Cape Dorset. Though her art arose from painful circumstances, it expressed mostly positive memories and experiences. Pitseolak is recognized as one of the first Inuit artists to create autobiographical works. Her art contained images of traditional Inuit life and contributed to the establishment of a modern Inuit art form, one that transmitted traditional knowledge and values while at the same time achieving worldwide popular and commercial success. Pitseolak was accepted into the Royal Canadian Academy of Arts in 1974 and was awarded the Order of Canada in 1977 for her work.

(*) Value is calculated as an average of the top stonecut sale records from ArtValue.ca database.
This information is not intended to substitute professional advice.
To estimate the value of a specific artwork created by Pitseolak Ashoona, follow some of the advice from our Valuating art page, or contact an art specialist if our automated estimate value is greater than C$2,500.