Peter Clapham Sheppard's work could be available for sale at public auction with prices in the range of C$25,000 - C$250,000, or even much higher. 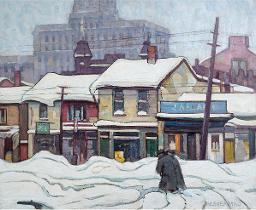 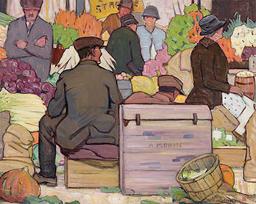 Peter Clapham Sheppard trained at the Central Ontario School of Art and Design and the Ontario College of Art under George Agnew Reid, John William Beatty and William Cruickshank. He was a member of the Ontario Society of Artists and an associate of the Royal Canadian Academy of Arts, and he exhibited internationally, most notably at the British Empire Exhibition at Wembley in 1924 to 1925, L’Exposition d’art canadien in Paris in 1927 and the World’s Fair in New York in 1939. In 2010, Sheppard’s works were featured in the exhibition Defiant Spirits: The Modernist Revolution of the Group of Seven, at the McMichael Canadian Art Collection. Curator Ross King lauded these paintings, writing that “works like The Building of the Bloor Street Viaduct (1916) and The Arrival of the Circus (1919) marked him out as a rare talent, well versed in modern painterly techniques and possessed of a visionary approach to the urban landscape.” This colourful depiction of the historic Bonsecours public market in Old Montreal is an outstanding example of Sheppard’s urban scenes – he captures the action between the market’s vendors and buyers with vivacity, using bold brush-strokes and strong interlocking shapes.

(*) Value is calculated as an average of the top oil painting sale records from ArtValue.ca database.
This information is not intended to substitute professional advice.
To estimate the value of a specific artwork created by Peter Clapham Sheppard, follow some of the advice from our Valuating art page, or contact an art specialist if our automated estimate value is greater than C$2,500.