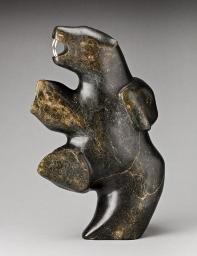 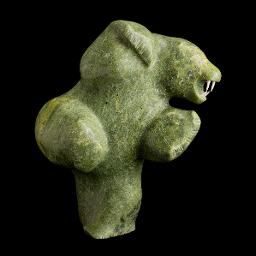 Pauta Saila is widely considered to be the consummate Inuit carver of polar bears. His respect and deep affection for the animal has been well documented in books and exhibition catalogues (see Ingo Hessel, Arctic Spirit, 2006, p. 90 for one example). Pauta loved carving too, and commented in a 1998 interview (when he was 82) that he still used axes, rasps and files (see Susan Gustavison, Northern Rock, McMichael, 1999, p. 63). He did not coin the phrase "dancing bear" - he probably would have preferred "balancing bear" - but he made the theme famous, iconic, and much copied.

(*) Value is calculated as an average of the top stone sculpture sale records from ArtValue.ca database.
This information is not intended to substitute professional advice.
To estimate the value of a specific artwork created by Pauta Saila, follow some of the advice from our Valuating art page, or contact an art specialist if our automated estimate value is greater than C$2,500.