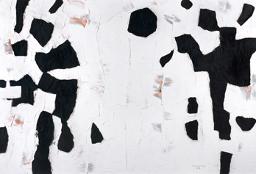 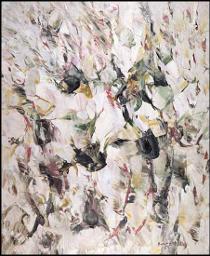 On May 15, 1958, the well-known Toronto art dealer, G. Blair Laing, visited Paul-Émile Borduas in his Paris studio. He purchased Patte de velours, 1955, along with six other paintings: Les boucliers enchantés, 1953, now at the Art Gallery of Ontario; Roses et verts, 1953; Le Château de Toutânkhamon, 1953, which belongs to a well-known Montreal collector; La carrière engloutie, 1953; Le vent dans les ailes, 1953, now in the hands of a Toronto private collector; and Vol vertical, a later picture, circa 1958. It is clear that G. Blair Laing was conservative in his choice. Canadian collectors were probably reticent in supporting Borduas's more recent undertakings. Most of the paintings Laing bought were from 1953, when Borduas had decided to move to New York and spent a summer in Provincetown before settling in Greenwich Village. As a matter of fact, three of the paintings purchased by Laing were painted in Provincetown: Les boucliers enchantés, Le Château de Toutânkhamon and La carrière engloutie. The other 1953 paintings were more than likely done at later date in New York. The only really recent painting was Vol vertical, a small picture in brown, pink and black, but not typical of the bold black and white of the period. Patte de velours, clearly dated 1955 on the painting, was the only one of its kind. It was most likely painted at the end of Borduas's New York stay or at the beginning of his Parisian period. Borduas left America in September of 1955 and, after some difficulty in finding a studio, proceeded to produce on a regular basis until the end of the year.

(*) Value is calculated as an average of the top oil painting sale records from ArtValue.ca database.
This information is not intended to substitute professional advice.
To estimate the value of a specific artwork created by Paul-Émile Borduas, follow some of the advice from our Valuating art page, or contact an art specialist if our automated estimate value is greater than C$2,500.