Oviloo Tunnillie's work could be available for sale at public auction with prices in the range of C$5,000 - C$10,000, or even much higher. 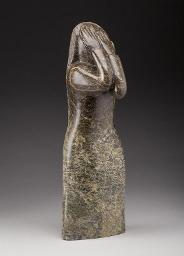 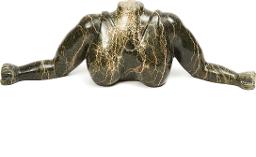 Beginning in the 1970's, the nude female body is a central motif for artist Oviloo Tunnillie. Though she made several experiments with the form, she is widely recognized as the first Inuit sculptor to produce works representing the naked female body. The unorthodoxy of this distinction is largely due to the lack of nudity throughout the Inuit carving tradition, in addition to the systemic suppression of sexuality among Indigenous populations by colonial governments since European Contact.

(*) Value is calculated as an average of the top stone sculpture sale records from ArtValue.ca database.
This information is not intended to substitute professional advice.
To estimate the value of a specific artwork created by Oviloo Tunnillie, follow some of the advice from our Valuating art page, or contact an art specialist if our automated estimate value is greater than C$2,500.