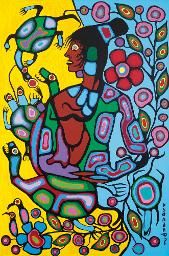 Born in 1931 at Sandy Point Reserve, Ontario, Morrisseau was a member of the Royal Canadian Academy of Arts since 1970. Norval Morrisseau was the celebrated founder of the Woodland School, which revitalized Anishnabe iconography, traditionally incised on rocks and Midewiwin birchbark scrolls. A self-taught painter, printmaker, and illustrator, Morrisseau created an innovative vocabulary which was initially criticized in the Native community for its disclosure of traditional spiritual knowledge. His colourful, figurative images delineated with heavy black form lines and x-ray articulations, were characteristically signed with the syllabic spelling of Copper Thunderbird, the name Morrisseau's grandfather gave him. Morrisseau completed many commissions during his career including the mural for the Indians of Canada Pavilion at Expo 67. He was made a member of the Order of Canada in 1978 and, in 1980, received honourary doctorates from both McGill and McMaster universities. In 1995 Morrisseau was honoured by the Assembly of First Nations.

(*) Value is calculated as an average of the top acrylic painting sale records from ArtValue.ca database.
This information is not intended to substitute professional advice.
To estimate the value of a specific artwork created by Norval H. Morrisseau, follow some of the advice from our Valuating art page, or contact an art specialist if our automated estimate value is greater than C$2,500.