Michael James Aleck Snow's work could be available for sale through Art Galleries or at public auction with prices in the range of C$100,000 - C$250,000, or even much higher. 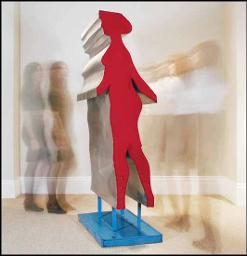 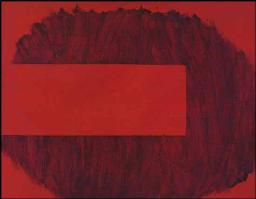 Michael Snow's work is internationally recognized and celebrated. A master of media, Snow works in film, video, photography, sound, installation, painting and sculpture, and informing each mode with understanding gained from his exploration of the others. He comments, "...my paintings are done by a filmmaker, sculpture by a musician, films by a painter...". With a sly sense of humour, Snow makes art that probes perception, consciously engaging the viewer in his questioning of the act of viewing itself. When asked about how the work Two fits within his oeuvre, Snow connects this early painting to other works from the early 1960s, such as Theory of Love, in the collection of the Art Gallery of Ontario. Pared down to binaries of positive/negative, foreground/background and push/pull, the piece becomes purely about surface - as the artist states, it ".becomes an object, becomes sculpture." With Two, Snow used a stencil to create the rectangular opening into the central dark red mass, a technique that was to figure prominently in his further explorations of the foreground/background binary in his iconic Walking Woman series. The reds that dominate the surface are broken by a tracery of subtle craquelure, exposing a dark blue ground. As the painting has aged, Snow's intentional craquelure has evolved, and in his view the result is either a success or failure, based on the viewer's perspective. However, Snow's humorous delivery of his comments on the work made it clear that he considers it a success.

(*) Value is calculated as an average of the top wood sculpture sale records from ArtValue.ca database.
This information is not intended to substitute professional advice.
To estimate the value of a specific artwork created by Michael James Aleck Snow, follow some of the advice from our Valuating art page, or contact an art specialist if our automated estimate value is greater than C$2,500.