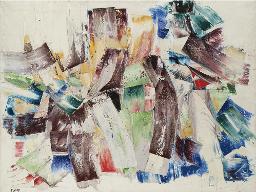 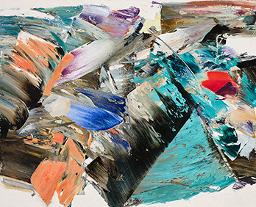 Marcelle Ferron was born on January 29, 1924, in Louiseville, Quebec. She studied to become a painter at the École des beaux-arts in Quebec City in the early 1940s, but eventually abandoned their program, which she considered too academic and conformist. She left Quebec City for Montreal, where she visited many art exhibitions, in search of inspiration. After viewing one of Paul-Émile Borduas’s paintings, she felt the urgent need to meet with him. Their first encounter in 1946 was life changing for the young artist. She was then introduced to the group of artists who would later become members of the Automatist group: Pierre Gauvreau, Françoise Sullivan, Fernand Leduc, Jean-Paul Mousseau, Marcel Barbeau and Jean Paul Riopelle. Her link to the Automatist group was made official in August 1948, when she became one of the 15 signatories of Borduas’s Refus global manifesto. This document signaled an important cultural shift in Quebec. In art historian Roald Nasgaard’s words, it was “a passionate attack on all the repressive social, political, historical and religious forces that had shaped the Quebecois people.” Not only was it the driving force behind the Automatist movement, it is now regarded as a milestone in the modernization of Quebec, exposing the province to the cosmopolitan ideas of the post-war era. At the young age of 24, Ferron was one of the seven women artists to sign it. The aftermath of the manifesto’s publication was challenging. Its author and signatories found it almost impossible to show their work in Quebec. Borduas was fired from his teaching position at the École du meuble; he had to move to New York and then to Paris. In 1953, Ferron left for the "City of Lights" with her three daughters, all aged under five. There, her canvases became larger, her palette more luminous. She would apply her paints with broader strokes of the spatula, focusing on gesture and rhythm. Art critic Robert Enright wrote: “She never dripped paint in the manner of Pollock or Riopelle; her pigment is not released as much as it is set down. There are no spatters and rag smears mixed in with the brushwork on Ferron’s surface. Before long, she reached the point where she used a palette knife the way a mason employs a trowel. She lays it on.” In the early 1960s, Ferron continued working on a larger scale, with dense compositions set against a white background, much as in Sans titre. Here, she arranged layers of brilliant colours in sharp, overlapping strokes with her trusty palette knife. Laid down in thick swoops, her impasto reveals the grainy texture of the paint that she would mix herself from pure pigments. In Enright’s words: “Ferron layers coloured shapes one on top of the other, but the effect is less the creation of tissues of transparency than laying down a foundation, as if the shapes were about to shift themselves into some pre-determined form. The use of marks to make forms and forms to create structure is Marcelle Ferron’s painterly signature.” Executed in 1962, Sans titre is from Ferron’s best and most coveted period. At that time, she participated in major group shows, such as at the Louvre in 1960 (Antagonisme), and at the Musée d’art moderne de la ville de Paris in 1962 and 1965. She also won the silver medal at the Bienal de São Paulo in 1961, making her the first Québécoise to receive such an international recognition.

(*) Value is calculated as an average of the top oil painting sale records from ArtValue.ca database.
This information is not intended to substitute professional advice.
To estimate the value of a specific artwork created by Marcelle Ferron, follow some of the advice from our Valuating art page, or contact an art specialist if our automated estimate value is greater than C$2,500.