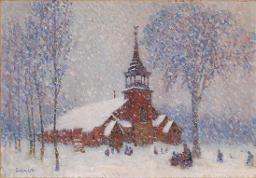 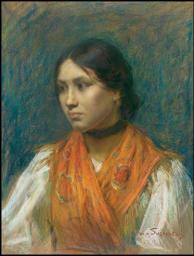 Marc-Aurèle de Foy Suzor-Coté's first visit to France was from 1891 - 1894. He returned from 1897 to mid-July 1907, living in Paris almost continuously, and only returned to Quebec briefly twice during this period. In Paris, he took life drawing classes and mastered the medium of pastel, which he used frequently between 1899 and 1902. His paintings often began as pastels to study colour values, but he also used pastels for finished works. Within his oeuvre, figurative work was prominent, from formal portraits to more natural poses. In this exquisite work, Suzor-Coté captured the illusion of reality in the young woman's delicately modeled features, glowing skin and eyes. He used contrasting techniques in her face and clothing and, as Laurier Lacroix writes, "The pastels, whether stumped or applied with bold strokes, create the illusion of tactility, with no attempt to hide the technique employed." The use of light is warm and dramatically lights up the figure against the dark background. Suzor-Coté gained considerable recognition in France by exhibiting at the annual Paris Salons, beginning in 1894, showing pastels and drawings as frequently as oils. He must have considered this work one of his finest, as he exhibited it in the 1906 Paris Salon.

(*) Value is calculated as an average of the top oil painting sale records from ArtValue.ca database.
This information is not intended to substitute professional advice.
To estimate the value of a specific artwork created by Marc-Aurèle de Foy Suzor-Coté, follow some of the advice from our Valuating art page, or contact an art specialist if our automated estimate value is greater than C$2,500.