Manly Edward MacDonald's work could be available for sale at public auction with prices in the range of C$2,500 - C$25,000, or even much higher. 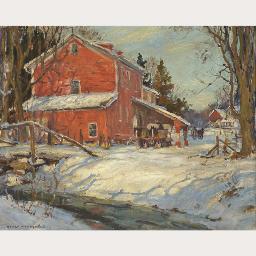 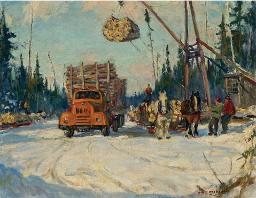 Traditionally, logging is a difficult and often dangerous occupation. During the early years of settlement in Ontario, logging served a dual purpose of clearing the land for farming and providing a source of building materials, fuel and income. In Prince Edward County, where Manly MacDonald (1889-1971) would likely have painted this scene, the logging industry had been active since the turn of the nineteenth century. Logging in the County focused mostly on the harvest of maple and pine done during the winter months by farmers who were not occupied by their primary occupation. In 1808, the first sawmill was built in Milford and by 1840 there were over 30 such operations. By the time this work was executed (probably in the mid-1950s), mechanization had begun to take over some of the more laborious aspects of foresting.

(*) Value is calculated as an average of the top oil painting sale records from ArtValue.ca database.
This information is not intended to substitute professional advice.
To estimate the value of a specific artwork created by Manly Edward MacDonald, follow some of the advice from our Valuating art page, or contact an art specialist if our automated estimate value is greater than C$2,500.