Luke Anowtalik's work could be available for sale at public auction with prices in the range of C$1,000 - C$25,000, or even much higher. 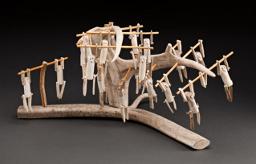 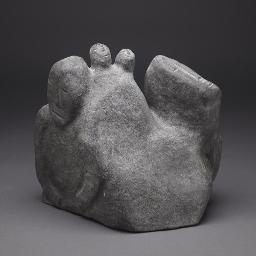 Luke Anowtalik was born in 1932 near Ennadai Lake. He began carving commercially in Whale Cove and continued after his move to Arviat. Along with his wife, Mary Ayaq Anowtalik, Luke is one of the most celebrated contemporary carvers of the Kivalliq region. Using staunch simplicity of form, Luke Anowtalik often concentrates on more traditional Inuit themes such as family groups. These familial carvings are often composed of clusters of figures or heads that emerge from a singular stone mass. His work is featured in the permanent collections of the Winnipeg Art Gallery (Winnipeg, MB) and National Gallery of Canada (Ottawa, ON). Likewise, he has enjoyed much exhibition success since early in his career, with his works showing at institutions such as the Art Gallery of Ontario (Toronto, ON), Innuit Gallery of Eskimo Art (Toronto, ON), and Marion Scott Gallery (Vancouver, BC).

(*) Value is calculated as an average of the top stone sculpture sale records from ArtValue.ca database.
This information is not intended to substitute professional advice.
To estimate the value of a specific artwork created by Luke Anowtalik, follow some of the advice from our Valuating art page, or contact an art specialist if our automated estimate value is greater than C$2,500.