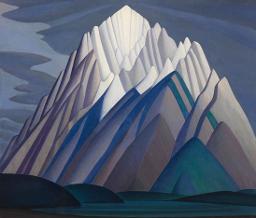 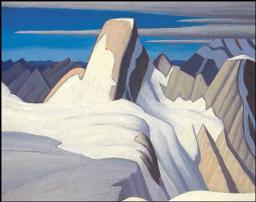 Lawren Stewart Harris's engagement with the scenery of the Canadian Rockies would dominate his work almost immediately upon his encountering it, and would last well beyond the days when he was visiting there regularly. North from Mount Mumm, Mount Robson Park, is based on scenery encountered initially in 1924, when he visited the Rockies for the first time in the company of A.Y. Jackson. In pursuit of a commission for the Canadian Northern Railway, but not formally sent there on the Railway's behalf, Jackson and Harris based themselves at the Jasper Park Lodge, Jasper National Park, Alberta, and made several trips to the surrounding valleys including the Tonquin, Maligne, and Athabasca regions. They also took an additional trip with the CN Railway from Jasper to Vancouver to Prince Rupert and back, stopping for an extended period of time in the Yellowhead region, now the vast Mount Robson Provincial Park in British Columbia. They explored deep into the Robson region, and numerous peaks from this area are extant in their drawings and paintings. North from Mount Mumm, Mount Robson Park is a depiction of Gendarme Mountain from the crest of Robson Pass, over 20 km into the backcountry from the railway line. It is a challenge to reach this region now, and would have been even more so then. Harris was a sturdy and determined hiker, seeking clean uncluttered scenery above the treeline where the glaciers dominated and the forest did not interfere with the lines of his work. Harris would return to this region as well as Yoho National Park and the Lake Louise area of Banff National Park in 1929. Although the details of exactly where he went in Robson Park are less clear from journals and letters, the paintings tell us he worked primarily at and around Robson Pass, as the distinctive peaks of Mount Robson, Lynx Mountain, Gendarme Mountain, and Mount Resplendent appear in works from this time. North from Mount Mumm, Mount Robson Park is a classic example of this type of his mountain work, where the geometry of the composition and the refined palette of whites, soft greys and browns, blues and mauve-purples are harmonious and fluid. While the central focus of the work, Gendarme Mountain, is accurate in its depiction of the actual physical structure of the peak, the surrounding mountainscape has been manipulated into a supportive, compositional role. Harris's mountain paintings, especially the later ones, are usually thus - accurate in terms of being a realistic depiction of the scenery as far the main element of the painting is concerned, with the secondary elements - distant mountains and foreground lakes - being changed as needed to suit his pursuit of spiritual expression. Harris was a member of the Toronto Chapter of the Theosophical Society by 1923, and by 1929, the year from when this work dates, was fully engaged in communicating Theosophical ideals through his art. Harris returned to the Rockies in 1926, 1928, and 1929, and regularly after 1940 from his home in Vancouver. The Rocky Mountains, prior to the abstraction to which he would later turn, were the scenery that allowed Harris to fully explore symbolic meaning and the doctrine of theosophy in his work. North from Mount Mumm, Mount Robson Park embodies this exploration. The work can be placed in a clear transitional line from earlier mountain works such as Athabasca Valley, Jasper Park, 1924 (collection of The Edmonton Art Gallery), South End of Maligne Lake, 1925 (McMichael Canadian Art Collection), and Mountain Sketch, circa 1924 - 1928 (collection of the Winnipeg Art Gallery). It leads directly into works such as Isolation Peak, Rocky Mountains, 1930 (collection of Hart House) and Mount Robson, circa 1929 (McMichael Canadian Art Collection).

(*) Value is calculated as an average of the top oil painting sale records from ArtValue.ca database.
This information is not intended to substitute professional advice.
To estimate the value of a specific artwork created by Lawren Stewart Harris, follow some of the advice from our Valuating art page, or contact an art specialist if our automated estimate value is greater than C$2,500.