Kathleen Moir Morris's work could be available for sale at public auction with prices in the range of C$10,000 - C$500,000, or even much higher. 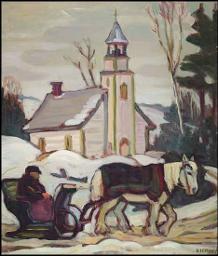 The area of Berthierville (once Berthier-en-haut), north of the Saint Lawrence, was an often represented and much loved painting place for Kathleen Morris during the early 1920s. As Michael Dunn has recounted, she felt "It had everything. snow, horses, a town centre with church and buildings. Her mother would take her to Berthier[ville] for a month to six weeks each winter, for several winters." Certainly Kathleen Morris's paintings of Berthier eloquently describe her interest in conveying the living dimension of a given environs - the place, the people and the nostalgia of a way of life. But such scenes also afforded the opportunity for pure formal investigation. Study in White, by its very title, reveals the artist's primary concern with the pictorial and architectonic aspects of her work. Like her colleagues of the Group of Seven and the Beaver Hall Group, Morris was among the generation of artists whose intelligent investigation into a modernist syntax led them beyond subjects of sentiment and narrative to concerns with form, colour and personal expression. Her rigorous training at the Art Association of Montreal under William Brymner, and the outdoor sketching excursions she took with Maurice Cullen to places such as Carillon, Quebec, undoubtedly fostered the artist's facility at painting en plein air. Winter scenes such as Study in White, with its boldly centralized composition, dynamic arrangement of verticals and horizontals and surprising tonal play, serve to demonstrate Morris's uniqueness and remarkable ability as a female art practitioner in the early decades of the twentieth century.

(*) Value is calculated as an average of the top oil painting sale records from ArtValue.ca database.
This information is not intended to substitute professional advice.
To estimate the value of a specific artwork created by Kathleen Moir Morris, follow some of the advice from our Valuating art page, or contact an art specialist if our automated estimate value is greater than C$2,500.