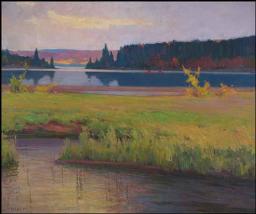 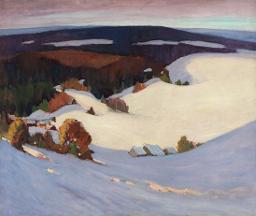 John Beatty's depiction of winter in the Laurentians is a serene and masterful work of art. The warmth of palette and subtle evening light show us Beatty at his finest. In his early life Beatty traveled to Paris, where he enrolled in the esteemed Académie Julian. Later he traveled to England, Italy and Spain. He studied with some of Canada's most important painters and served as an official war artist in World War I. Beatty also had a passion for teaching, and he never left his academic training behind. Laurentian Winter highlights a fresh, nationalistic approach to the subject of the Canadian landscape. The scholar and curator Dorothy Farr stated, "The movement to paint Canada in a distinctly Canadian way went back to the early years of the century when Toronto artists such as C.W. Jefferys, George Reid and others sought to shut from their minds the dominating popular presence of European painting and instead, to select subjects for painting which were expressive of the Canadian milieu." Beatty actively participated in this movement and, on early sketching trips, painted alongside the artists who would ultimately form the Group of Seven.

(*) Value is calculated as an average of the top oil painting sale records from ArtValue.ca database.
This information is not intended to substitute professional advice.
To estimate the value of a specific artwork created by John William (J.W.) Beatty, follow some of the advice from our Valuating art page, or contact an art specialist if our automated estimate value is greater than C$2,500.