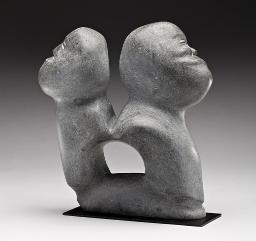 Chosen for the first-ever solo public exhibition of an Inuit artist in 1970, elected to the Royal Canadian Academy in 1973, and included in virtually every major public exhibition of Inuit sculpture in the last five decades, John Tiktak is widely regarded as one of Canada's greatest artists. The British sculptor Henry Moore was known to be an admirer of his work. Tiktak's powerful and moving sculptures, with their universal themes and classic forms, easily transcend the "Inuit art" category.

(*) Value is calculated as an average of the top stone sculpture sale records from ArtValue.ca database.
This information is not intended to substitute professional advice.
To estimate the value of a specific artwork created by John Tiktak, follow some of the advice from our Valuating art page, or contact an art specialist if our automated estimate value is greater than C$2,500.