John Geoffrey Caruthers Little's work could be available for sale at public auction with prices in the range of C$10,000 - C$250,000, or even much higher. 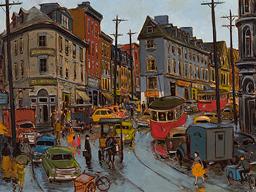 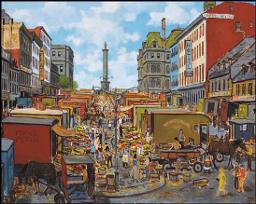 John Little studied art at the Montreal Museum of Fine Arts and in New York at the Art Students League, but also had a keen interest in architecture, having worked as a draughtsman in his father's architectural firm Luke & Little starting in 1951. When he returned exclusively to painting in 1953, his subjects were the street scenes of old Montreal and Quebec City. He captured the unique ambiance and architectural details of their distinctive buildings. Many of these neighbourhoods and ethnic communities were adversely affected by urban planners of the 1960s, and Little's work is a record of the uniqueness of what was lost. Market at Place Jacques-Cartier is a superb example of Little's urban scenes, a detailed and vivacious depiction of an outdoor market at this historic square in the heart of old Montreal, at the entrance to the old port. Little's palette was often a tonal one based on grey, brown and orange, but this important painting, typical of his early work, explodes with colour, adding to the animation of the scene. Traditional mixes with contemporary as Little contrasts country farmers in their aprons with smartly dressed city dwellers, and gas-powered vans with horse-drawn carts, in a work that exudes the vitality of Montreal's urban life.

(*) Value is calculated as an average of the top oil painting sale records from ArtValue.ca database.
This information is not intended to substitute professional advice.
To estimate the value of a specific artwork created by John Geoffrey Caruthers Little, follow some of the advice from our Valuating art page, or contact an art specialist if our automated estimate value is greater than C$2,500.