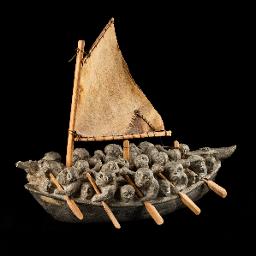 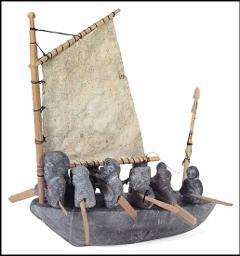 Strong in will and spirit, Joe Talirunili's distinctive carvings are a product of his environment and are inspired by the history and legends of the Inuit people, as well as his own experiences. Talirunili was born in Neahungnuk camp near the Great Whale River north of Puvirnituq, Nunavik (Arctic Quebec) between 1893 and 1906. Talirunili's own recollection is the 1906 date, however, written records in Ottawa debate this. Talirunili grew up as part of traditional Inuit culture. The Inuit studied the land and were shaped by their environment, which sustained their way of life. They adapted symbiotically with their harsh arctic landscape, becoming migratory by necessity, moving inland during the summer months and returning to the coast during the winter to hunt seal. Talirunili's creativity was born from these experiences and expressed through his carving and graphic work, which filled the last fifteen years of his life. Talirunili's most significant and important pieces are from his Migration series. These dramatic sculptures relate to a personal story of survival during a migration back to the mainland from an outer island in Hudson Bay. As the family fought to reach land in their overcrowded umiak (a boat they hastily constructed with whatever wood, sealskin and rope that they had available), the ice melted around them. Talirunili notes in his writing the names of many of his people who were lost at sea during this expedition. He was just a small child at the time, and this was a central, life-changing event which he carried with him throughout his life. Carved from stone and accented with wood, bone and leather, works from this series evoke a sense of the unique history of the Inuit in their courage to survive. One can feel the fear of his people in their struggle back to the shore through the harsh elements and icy, mist-covered water, but also the feeling of the miraculous for those who survived. Talirunili writes, "There was a great crash of thunder which frightened all of the children in the boat and made us cover our ears with our hands, it was so loud. And when the thunder stopped, we could see that a path had been made through the ice for us and in this path there was just flat water with no pieces of ice. This path led us to land." Talirunili's work is not typical of Puvirnituq sculpture, which is known for its realistic presentation with smooth surfaces and its fine lines. On the contrary, his work is harder and more abstract. His carving methods are rough in style, described by Johnny Pov as "carving in a style that can not be copied." Marybelle Myers writes, "A lesser artist might be accused of audacity but Joe's dispensation came through membership in that class of geniuses who, following their inclination, may choose to imitate or ignore the 'rules' of art." Talirunili carved with no preliminary sketches or planning and used what materials were available to him. The resulting work is bold and original, and among the most important examples of Inuit sculpture in existence today.

(*) Value is calculated as an average of the top stone sculpture sale records from ArtValue.ca database.
This information is not intended to substitute professional advice.
To estimate the value of a specific artwork created by Joe Talirunili, follow some of the advice from our Valuating art page, or contact an art specialist if our automated estimate value is greater than C$2,500.