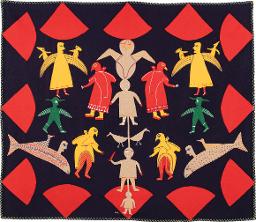 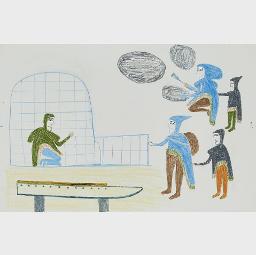 Wonderfully prolific and graphically gifted, Jessie Oonark was a bold and yet thoughtful image maker. Her use of colour, whether intense or subtle, gave life to even the most ordinary of subjects. Compared to her later more abstract drawings, Welcoming Friends tells a story of day to day life. Oonark spent most of her time in camps in the Back River region where she took part in a traditional Inuit way of life. This work is an illustration of receiving visitors at her igloo; a gathering of women, perhaps showing their daughters who are in toe, how to prepare the skins for eventual sewing. There is a cheerful community feel to the image. For more information about Oonark's drawings see, Sarah Milroy, Flashback: Jessie Oonark, Inuit Art Quarterly, Fall 2017, pages 82-95.

(*) Value is calculated as an average of the top embroidery sale records from ArtValue.ca database.
This information is not intended to substitute professional advice.
To estimate the value of a specific artwork created by Jessie Oonark, follow some of the advice from our Valuating art page, or contact an art specialist if our automated estimate value is greater than C$2,500.