Jean-Philippe Dallaire's work could be available for sale at public auction with prices in the range of C$50,000 - C$250,000, or even much higher. 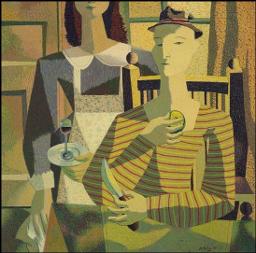 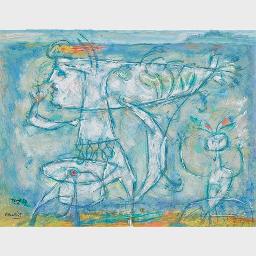 Jean-Philippe Dallaire (1916-1965) was a painter, an illustrator for the National Film Board of Canada, and a teacher. He had some formal art training in Canada and then in Paris, 1938-40 at the Studios of Sacred Art run by Maurice Denis and Georges Desvalières, and at the André Lhote Academy. In Paris, the work of Picasso, Pellan, and the Surrealists were a revelation, and would have a lasting influence on his art. He was also interested in naive art and children's drawings. His large body of work shows a variety of stylistic influences and is imaginative and original. In 1958, he left his family and moved to Vence in Alpes-Maritime on the French Riviera, where he died in 1965. A Nymph into the St. Laurent's River [sic] is a work of fantasy, painted by Dallaire in France, far from the Canadian river that was discovered by Jacques Cartier on June 9, 1534 and named after Saint Lawrence of Rome. The ninth of June was also Dallaire's birthday, and this may have been painted on that day in June 1959. St. Lawrence (a lesser-known, martyred saint) has been transformed into the spirit of the river, appearing as a fish with a human head, holding a cross (one of his attributes) before him. The saint met a horrible death - he was roasted alive - and the flame above his head may refer to that event. A red-eyed cyclops (likely the artist himself) in the bottom left corner is weeping, while an impish figure to the right may be one of the saint's torturers. Dallaire had done a number of religious paintings and a mural for the Dominican convent in Ottawa in 1936, and had attended the Studios of Sacred Art in Paris, whose aim was to teach artists to produce religious art that was modern and relevant.

(*) Value is calculated as an average of the top oil painting sale records from ArtValue.ca database.
This information is not intended to substitute professional advice.
To estimate the value of a specific artwork created by Jean-Philippe Dallaire, follow some of the advice from our Valuating art page, or contact an art specialist if our automated estimate value is greater than C$2,500.