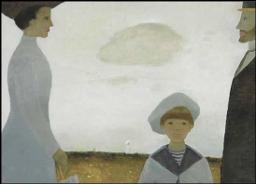 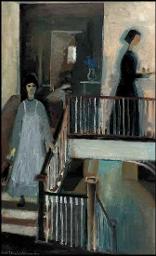 Les servantes may look like an unusual painting by Jean Paul Lemieux, since we are used to his vast and empty landscapes or to his single and static figures. But this was Lemieux after his return from one year in France, when he experienced the shock of what he called the "horizontality" of the Canadian landscape (at least in the east!). Before this, Lemieux was a painter involved, like many of his American counterparts of the same period, in social concerns. Here he depicts maids, seemingly working in a small hotel in Quebec City or elsewhere, climbing stairs to serve the clients. In fact, this type of social concern for the lower class never completely left Lemieux. In many of his subsequent paintings one sees such subjects as poor children (L'Orpheline, 1956), a simple French Canadian old couple (Les noces d'or, 1966), or a local priest (Le visiteur du soir, 1956) much more often than the depiction of important people (although he was commissioned to paint the Queen of England and Cardinal Léger!). In Les servantes, one gets the feeling, as Marie Carani so aptly observed in her essay for the great Lemieux retrospective in 1992 at the Musée du Québec, of a certain alienation between the women. Each one lives in her world without communication with others. The railings are like fences, and the change of level created by the stairs confirms the distance between the two women. One is reminded of the universe explored by some great American counterparts of Lemieux like Raphael Soyer, or early Mark Rothko paintings done in the subways of New York, or even Edward Hopper. In fact, if one looks closely at the painting, one is struck by the fact that the simplification of the faces - the upper woman is reduced to a profile and the lower one has no mouth - already shows in what direction Lemieux's painting was going. In 1971, he would paint La visite des dames, at the Musée national des beaux-arts du Québec, where the same simplification was at play, but without the richness of psychological insight we have in Les servantes, as if Lemieux in the meantime had passed from the psychological to the ontological. The subtlety of depth in Les servantes is amazing. The upper level opens on a space where we see a vase with flowers on a table, an open room and a window shedding light on the background scene. This is the world of the servants, the world of their care - the world where their lives have meaning. But it is also a powerful image of interiority, of the unconscious, and without doubt there is a dreamlike quality in this painting. And as in dreams, people are often faceless.

(*) Value is calculated as an average of the top oil painting sale records from ArtValue.ca database.
This information is not intended to substitute professional advice.
To estimate the value of a specific artwork created by Jean Paul Lemieux, follow some of the advice from our Valuating art page, or contact an art specialist if our automated estimate value is greater than C$2,500.