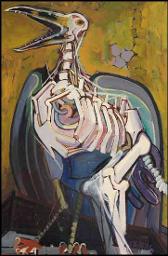 In 1946, after his time as an official Canadian war artist, Jack Shadbolt remained haunted by the things he had witnessed during the war. In London, he had walked through bombed streets on his way to his job filing photographs taken by the army during their advance into the camp at Buchenwald, and he was traumatized by the horrors that he saw. In Canada, he began a series of works exploring his unease, using animals, including birds, as subjects. The following year he would work at Buccaneer Bay on North Thormanby Island, executing another series using themes of driftwood and skeletal forms, some beautiful, others dealing with the difficult imagery that remained in his mind. In Vancouver, he sketched the architectural forms of the city, using rusted bridges and derelict buildings as metaphors for the carnage of war. Bird Skeleton has elements of each of these things; the skeletal rib cage of the bird is as bleached as the driftwood at Buccaneer Bay, and the bird's massive, predatory form clings with red talons to a rusted steel girder. It is a profoundly powerful image - primitive, supernatural and frightening. Shadbolt's choice of setting the bird against a gold-toned, mosaic-like background furthers the sense of the terrible power that it conveys, seeming to reign, as it does, over some rich yet apocalyptic domain. We know from Shadbolt's letter (which accompanies this lot), that "The Bird Skeleton was done in 1947...at that time, I had not too much money for art materials so I often painted on the backs of boards or paper or canvases...This work was done just before I went to New York to study at the Art Students League in 1948." Shadbolt then goes on to say, regarding the other side of this double-sided work, "In 1960 I went to Greece and painted there, on Mykonos Island, a series of heavily pigmented sketches of the port. When I returned home again I was still in this mood and reaching for any surface I had handy to make quick memory impressions of the mood of Greece before I forgot. So, obviously, I must have used the back of this other work of the Bird Skeleton - though I cannot think how I was so foolish to do so as I came to regard the Bird Skeleton as one of the best works I had done to date. And, curiously, though I had forgotten this impression of Greece, when I see it now I realize that it is far better than I must have thought at the time. In fact, I think it is bold and expressive painting." Shadbolt has certainly described his work well, the bold expressiveness of the day's catch caught in a black tangle of net is in vivid contrast to the delicate, for Shadbolt at least, harbour scene of Mykonos in the distance.

(*) Value is calculated as an average of the top acrylic painting sale records from ArtValue.ca database.
This information is not intended to substitute professional advice.
To estimate the value of a specific artwork created by Jack Leonard Shadbolt, follow some of the advice from our Valuating art page, or contact an art specialist if our automated estimate value is greater than C$2,500.