Henry Evaluardjuk's work could be available for sale at public auction with prices in the range of C$2,500 - C$25,000, or even much higher. 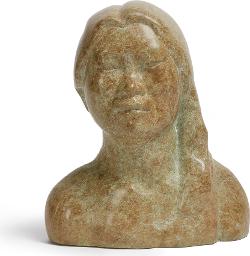 Henry Evaluardjuk was born in the Igloolik area, but spent much of his young adult life travelling to the neighbouring communities of Pond Inlet and Arctic Bay. Likewise, after he moved to Pond Inlet in 1952 he continued to make lengthy trips to the other communities. Evaluardjuk had began carving in the late 1940s, selling works wherever he happened to be living. After a stay in a southern TB sanatorium he finally settled in Frobisher Bay (now Iqaluit). Although unsigned and earlier than other published examples, this superb small sculpture has clear hallmarks of a "Henry bear": specifically the overall stance, distinctive gait, the slightly turned-in paws, the low extended neck, and the ears. References: for an early 1960s bear carved by Evaluardjuk at the Hamilton Sanatorium and signed with his disc number see Walker's May 2017, Lot 2. For an important 1963 example carved in Iqaluit, that is perhaps the prototype of First Arts: Inuit & First Nations Art Auction www.firstarts.ca

(*) Value is calculated as an average of the top stone sculpture sale records from ArtValue.ca database.
This information is not intended to substitute professional advice.
To estimate the value of a specific artwork created by Henry Evaluardjuk, follow some of the advice from our Valuating art page, or contact an art specialist if our automated estimate value is greater than C$2,500.