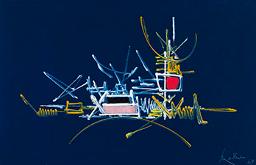 In 1963 Georges Mathieu, by then well-known for pioneering the inclusion of performance in his painting practice, was invited to produce a live-action series of works for a Montreal television studio. Ten paintings and 30 gouaches on paper were soon the subject of the first of his solo exhibitions at the storied Dominion Gallery. Fluent in several languages and a student of law, philosophy and literature, Mathieu was a self-taught artist by 1942 before settling in post-war Paris in 1947. His earliest abstract paintings focused on amorphous forms and, long before his exposure to the work of Jackson Pollock and other “action” painters, he was already experimenting with drip techniques. He organized and participated in group exhibitions with his avant-garde contemporaries, including Jean Dubuffet, Jean Fautrier and Wols. His first tachiste paintings were assembled for his premier Paris exhibition in 1950 at Galerie René Drouin, and by 1952 his works were being shown internationally in prominent galleries and museums. Epau is a particularly striking example of Mathieu’s graphic agility and fearless application of contrasting hues in an image that is clearly dancing to its own lively rhythm!

(*) Value is calculated as an average of the top oil painting sale records from ArtValue.ca database.
This information is not intended to substitute professional advice.
To estimate the value of a specific artwork created by Georges Mathieu, follow some of the advice from our Valuating art page, or contact an art specialist if our automated estimate value is greater than C$2,500.