George A. Buytendorp's work could be available for sale at public auction with prices in the range of C$500 - C$10,000, or even much higher. 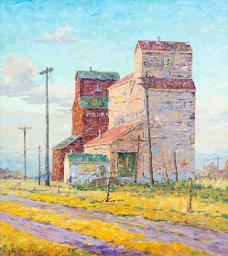 Born in the Netherlands in 1923, George Buytendorp studied at the Academy of Fine Arts and Related Sciences in The Hague. He apprenticed under his father, also a graduate of the academy, and completed his studies in art and art restoration. He owned his first studio in Arnhem and later in Amsterdam and worked for the Dutch government. He then became a designer, art consultant, and purchasing agent for the Artificia Gallery in The Hague. He and his family immigrated to Canada in 1951 and settled in Manitoba. During his 40 years in Manitoba, he was an executive member of the Brandon Allied Arts Council, and a member of the board of directors of the Manitoba Design Institute, the Brandon University Arts Advisory Board, and the Manitoba Society of Artists. He taught workshops and advanced classes in Ontario and across the Prairies and guest lectured at universities. George Buytendorp's paintings captured the grandeur of Canada's prairie and wilderness. His work can be found in private and corporate collections throughout North America and Europe.

(*) Value is calculated as an average of the top oil painting sale records from ArtValue.ca database.
This information is not intended to substitute professional advice.
To estimate the value of a specific artwork created by George A. Buytendorp, follow some of the advice from our Valuating art page, or contact an art specialist if our automated estimate value is greater than C$2,500.