Frederick Horsman Varley's work could be available for sale at public auction with prices in the range of C$50,000 - C$1,000,000, or even much higher. 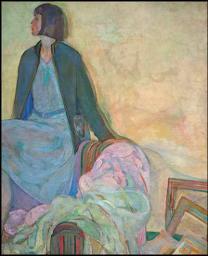 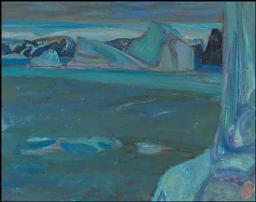 Frederick Varley, following in the footsteps of A.Y. Jackson and Lawren Harris, made one trip to the Arctic in 1938. He traveled north on the RMS Nascopie from Montreal and, in the summer of 1938, produced some striking images of the north. Some of his best sketches are marked by a remarkable audacity in their form and execution, equal to but quite distinct from the arctic sketches of Harris. Arctic Icebergs, which might more accurately be described as an icebergscape, is a vivid and splendid example of Varley at his best. Varley was particularly struck by the icebergs and wrote to a friend, "the icebergs - literally hundreds of them, floating sphinxes - pyramids - mountain peaks with castles on them - draw-bridges & crevasses, huge cathedrals - coral forms magnified a thousand fold." He was equally struck by the strange colours of the icebergs, commenting on the "blue greens & the violets" and even the "mauve & the sea deep purple and red." This panel is one of the most vivid oil sketches produced on the trip. The work is striking for both the use of colour - a startlingly blue-green which predominates, and for the dramatic composition. At the right of the image, one of the "coral forms magnified" provides a strong vertical that seems to infringe on the viewer's space. This device immediately establishes the spatial field of the work itself, the turbulent expanse of water, which is handled in broad, painterly strokes and the iceberg and mountains in the background. The emphatic horizontal in the sky, together with the vertical iceberg at the right, serve as framing elements for the composition. It is a compelling and forceful image and suggests both the danger and power of the icebergs that Varley and his shipmates encountered. The choice of colour conveys the frigid atmosphere brilliantly and immediately. We are present in a landscape that is both strangely beautiful and exhilaratingly dangerous.

(*) Value is calculated as an average of the top oil painting sale records from ArtValue.ca database.
This information is not intended to substitute professional advice.
To estimate the value of a specific artwork created by Frederick Horsman Varley, follow some of the advice from our Valuating art page, or contact an art specialist if our automated estimate value is greater than C$2,500.