Frederic Marlett Bell-Smith's work could be available for sale at public auction with prices in the range of C$5,000 - C$100,000, or even much higher.

From ArtValue.ca records, the highest price paid at auction for an oil painting work attributed to Frederic Marlett Bell-Smith (1846-1923) was C$56,050 - paid for "Morning Campfire Below Castle Mountain" at Heffel in Vancouver on Wed, Nov 23, 2016.
ArtValue.ca has 382 auction art sale records for their oil painting results, with prices in the range of C$5,000 to C$100,000. 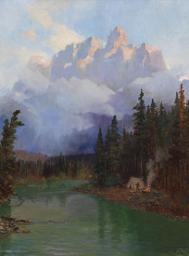 The distinctive landmark summits of Castle Mountain in Alberta's Banff National Park make a splendid backdrop for this scene of a morning campfire along the banks of the Bow River by Frederic Marlett Bell-Smith. One of Canada's earliest and most prolific painters, Bell-Smith explored the Rocky and Selkirk Mountains along the Canadian Pacific Railway in the late 1880s, first seeing the region just two years after the last spike was driven. He returned often and gave us many remarkable depictions of an area that was largely unknown to the world at the time. Here, Castle Mountain glints through low clouds, which often rise up from the river in the morning. The peak was named by Sir James Hector in 1858, but its name changed to Mount Eisenhower in 1946 to commemorate Dwight D. Eisenhower's visit to Canada that year. The name change was controversial and reversed in 1979, with only the east tower of the peak retaining the Eisenhower name. Bell-Smith's depiction of the mountain is steeped in the romantic artistic view of his time, with its commanding scene encompassing the small figure with his tent, alone in the serene and majestic wilderness.

(*) Value is calculated as an average of the top oil painting sale records from ArtValue.ca database.
This information is not intended to substitute professional advice.
To estimate the value of a specific artwork created by Frederic Marlett Bell-Smith, follow some of the advice from our Valuating art page, or contact an art specialist if our automated estimate value is greater than C$2,500.