Franklin Milton Armington's work could be available for sale at public auction with prices in the range of C$2,500 - C$100,000, or even much higher. 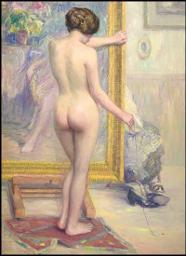 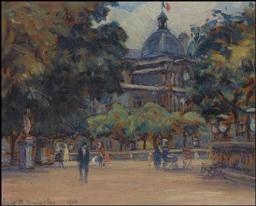 Franklin Armington lived in Paris for nearly 35 years and became established in the artistic community in the Latin Quarter. After studying at the Académie Julian, he went on to become a well-known painter and printmaker, with works placed in the collections of museums such as the Museé Nationale de Luxembourg, the Victoria and Albert Museum, the British Museum, the Petit Palais and the Library of Congress in the United States. This charming painting perfectly captures the ambiance of this famous Paris garden.

(*) Value is calculated as an average of the top oil painting sale records from ArtValue.ca database.
This information is not intended to substitute professional advice.
To estimate the value of a specific artwork created by Franklin Milton Armington, follow some of the advice from our Valuating art page, or contact an art specialist if our automated estimate value is greater than C$2,500.