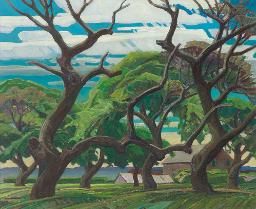 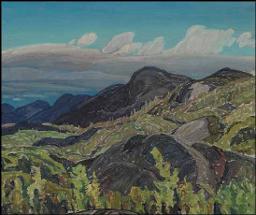 Summer Landscape is a dramatic oil that shows us the many sides of Franklin Carmichael as an artist. It is a charged work, alive with energetic brushwork, yet harmonious in subdued colour. Depicting a garden~like landscape of small plants growing valiantly in the short summer season, this work is likely to be have been painted in the La Cloche hills, which Carmichael visited first in 1926, and which were a continuing source of inspiration for him, so much so that he built a cabin there in 1935. In 1932, he stopped working as a commercial designer and thus had more time to paint. The works of the late 1930s, of which this is a prime example, are filled with energy and feeling. Carmichael's talent as an illustrator is clear in the way he takes us into this superb painting. By placing a small rounded rock on very bottom edge of the work, he creates an inviting feeling, as if we are about to step off the rock and walk forward and down the hill into the valley, largely hidden below us but framed by blue hills. We are high above the rest of the landscape and look down on things from a position of advantage. Compositionally, it is indeed an inviting scene. Is there a lake just out of view beyond the first low ridge? In terms of colour, the work is understated, yet the small range of colours that Carmichael uses is accented by the amount of unpainted board that shows through the work in the foliage, rocks, distant hills and valley. The board is a greyish~white, very close tonally to the greys that Carmichael uses, and similar to the colour used for the clouds in the sky. The unpainted board reads through the work as white accents. Carmichael's abilities as a watercolourist ~ wherein he mastered the use of negative spaces ~ are also demonstrated in his oils. He was, as John McLeish wrote, "an extraordinary craftsman in commercial art, a modest man whose gift for design was so pronounced as to be almost a handicap." Summer Landscape is not unlike the work of David Milne in feeling, with much attention being focused on a small region of richly patterned life, and the scene has a vibrating energy. The areas of scrubby brush that grow in the hollows between the rocks, where soil gathered over thousands of years and water would have collected to nourish these plants, roll into the dark hills in easy waves of movement. The surface of the land, the way it would feel to walk upon is almost palpable ~ we can imagine the difficulty of navigating in such terrain, terrain that Carmichael loved and frequently explored. This is one of the great pleasures of viewing works by the artists of the Group of Seven, and a reason they are so beloved by Canadians ~ they take us to places we have not been, and for those that have been there, they take us back again.

(*) Value is calculated as an average of the top oil painting sale records from ArtValue.ca database.
This information is not intended to substitute professional advice.
To estimate the value of a specific artwork created by Franklin H. Carmichael, follow some of the advice from our Valuating art page, or contact an art specialist if our automated estimate value is greater than C$2,500.