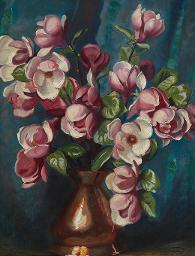 Salisbury was a member of the Royal Academy. He is famous for his portraits of King George V, Winston Churchill, and Franklin D. Roosevelt.