Francine Gravel's work could be available for sale through Art Galleries or at public auction with prices in the range of C$500 - C$5,000, or even much higher.

From ArtValue.ca records, the highest price paid at auction for an oil painting work attributed to Francine Gravel (1944) was C$3,125 - paid for "Mes demoiselles d'Avignon" at Heffel in Vancouver on Thu, Jan 27, 2022.
ArtValue.ca has 56 auction art sale records for their oil painting results, with prices in the range of C$500 to C$5,000. 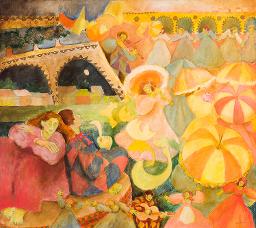 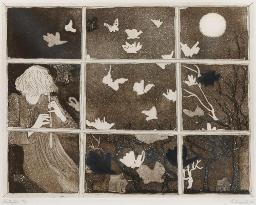 Francine Gravel was born and raised in Montreal, Quebec where she attended the Ecole des Beaux-Arts, studying under Albert Dumouchel. She later pursued post-graduate studies in Belgium at the Academy of Fine Arts in Antwerp and at the University of Calgary (Alberta). She was presented in her premiere exhibit of etchings and engravings in 1967 - an exhibit that launched a career that has continued to grow ever since.. She now enjoys an international reputation and has collectors throughout the world. She exhibits in numerous galleries throughout Canada where she is frequently featured in one-woman shows. She has participated in more than sixty group exhibitions and her work has been shown in Canada, Belgium, the U.K., France, Monaco and the United States.

(*) Value is calculated as an average of the top oil painting sale records from ArtValue.ca database.
This information is not intended to substitute professional advice.
To estimate the value of a specific artwork created by Francine Gravel, follow some of the advice from our Valuating art page, or contact an art specialist if our automated estimate value is greater than C$2,500.