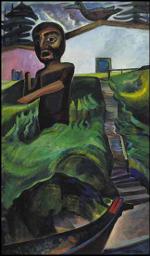 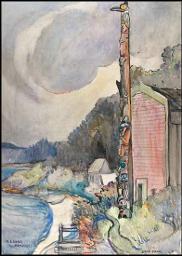 Emily Carr conceived the idea of documenting the totemic monuments of the First Nations peoples of British Columbia as early as 1907. She felt, however, that she did not have the tools to depict these powerful sculptural forms, and because of this she went to France in 1911 to learn about modern art. Ironically, at a time when Picasso was causing a sensation with early cubism and Matisse had moved beyond the early brashness of fauve colours, Carr's version of modernism was a second-hand post-impressionism tinged by fauve colour taught by British and New Zealand expatriates. Although Carr could not be described as a high modernist, her time in France did change her approach to her subject matter completely and allowed her to introduce non-naturalistic colour into her work. Upon her return to Canada in late 1911 she was a different artist, and her first great experiment with her new artistic toolkit was an excursion to northern British Columbia in the summer of 1912. In the field Carr seems to have produced a large number of small watercolour sketches and a very limited number of oil sketches. These provided the raw material for a series of larger-scale compositions that were produced in the studio in the fall of 1912. Memkish is one of the watercolours that resulted from this excursion and was, in all likelihood, produced in the studio from rough field notes. A handsome and accomplished work, it reveals, nevertheless, a fundamental conflict within Carr and her work. Carr's instincts as an artist concerned with colour, form, light and composition, are sometimes in conflict with her role as a documentarian. Although the house and pole are the main subject of the work, we are struck by the sweep of the shoreline, the dramatic swirl of the clouds in the sky and the vibrant life of the forest and bushes on the shore. In short, Carr, by creating a dynamic and interesting composition, has in effect downplayed the documentary aspect of the work. This is no doubt why Carr's collection of totemic subjects was not purchased for the collection of the Provincial Museum in 1913 following her showing of a large group of these 1912 paintings in Vancouver that spring. While we can relish the contrast between the pink façade of the house, surrounded by the greenish trim and the blues of the ocean, the specifics of the pole itself are somewhat lost in the drama of the composition as a whole. It is perhaps ironic that what makes this work an exciting example of her early work as a watercolourist is at odds with her goals as a documentarian, but it demonstrates that Carr is above all else an artist, whose primary goal is to make a satisfying and appealing work of art. Here she employs the fauve colour and rapid brush work of her French training to the totemic monuments of the First Nations and, perhaps more importantly, the landscape from which they spring. It was works such as this one that caught the imagination of Marius Barbeau and Eric Brown and led to her first showing in eastern Canada in the landmark 1927 exhibition West Coast Art, Native and Modern.

(*) Value is calculated as an average of the top oil painting sale records from ArtValue.ca database.
This information is not intended to substitute professional advice.
To estimate the value of a specific artwork created by Emily Carr, follow some of the advice from our Valuating art page, or contact an art specialist if our automated estimate value is greater than C$2,500.