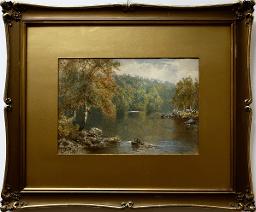 On The Wear, Durham
watercolour

Estimate $80 - $100
Sold for CAD $276
We do not have enough information to calculate an estimated Artist Value for Edward John Du Val.
To estimate the value of a specific artwork created by Edward John Du Val, follow some of the advice from our Valuating art page.