Eddy Cobiness's work could be available for sale at public auction with prices in the range of C$1,000 - C$10,000, or even much higher. 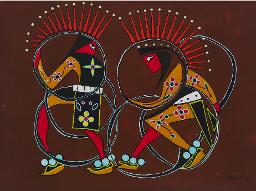 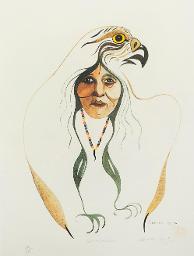 Eddy Cobiness was an Ojibwe-Native Canadian and his art work is characterized by scenes from the life outdoors and nature. He began with realistic scenes and then evolved into more abstract work, influenced by his colleague at the time, painter Benjamin Chee Chee. He belonged to the "Woodland School of Art" and was a prominent member of the "Professional Native Indian Artists Incorporation", better known as the "Indian Group of Seven". Cobiness began drawing pictures of birds in sand, snow or on cardboard, in his childhood. In the 1950s, during his military service years, he discovered working in watercolour. In the 1960s his ink and watercolour drawings were commercially successful, and he began his art career. For Cobiness, the life outdoors and nature always was subject of his works. He further developed his work unimpeded and worked with several styles, using many media. It would bring him international recognition. Cobiness died in Winnipeg Manitoba on January 1, 1996.

(*) Value is calculated as an average of the top acrylic painting sale records from ArtValue.ca database.
This information is not intended to substitute professional advice.
To estimate the value of a specific artwork created by Eddy Cobiness, follow some of the advice from our Valuating art page, or contact an art specialist if our automated estimate value is greater than C$2,500.