Canadian (1964)
Diane Larouche is a Canadian painter.
From ArtValue.ca records, the highest price paid at auction for an acrylic painting work attributed to Diane Larouche (1964) was C$306 - paid for "Iris Study" at Saskatchewan NAC in Regina on Sat, Jun 2, 2018.
ArtValue.ca has 9 auction art sale records for their acrylic painting results, with prices in the range of C$250 to C$500. 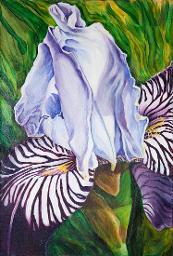 Diane LaRouche was born in 1964 in Manitouage, Ontario, but was raised in Saskatoon, Saskatchewan. She received a Bachelor of Fine Arts Degree from the University of Saskatchewan in 1987. At her convocation, Larouche was awarded the Judith Poole Memorial Award for most promising BFA graduate. After graduation, LaRouche stayed in Saskatoon, as artist in residence at Vincent Massey School and then working at a commercial gallery before moving to Biggar, Saskatchewan, in 1989. In Biggar, she worked as a curator/director of the Biggar Museum and Gallery for ten years. LaRouche works in various mediums including acrylic painting, drawing and mixed media. Most recently, she has been working on integrating drawing and painting in a series inspired by Renaissance Old Masters' figure drawings. For the most part, her fascination with Renaissance drawing has to do with the beauty of the images and the power of the line. Many of her images deal with spiritual themes, many of them depicting angels. In 2013, she created a series of eight 'Icons' which features goddess imagery. "I am constantly exploring and questioning the notion of sacredness", she says. LaRouche's work has been exhibited extensively in group and solo exhibitions across the Saskatchewan. Diane LaRouche currently lives in Biggar, Saskatchewan.

We do not have enough information to calculate an estimated Artist Value for Diane Larouche.
To estimate the value of a specific artwork created by Diane Larouche, follow some of the advice from our Valuating art page.