David Lloyd Blackwood's work could be available for sale at public auction with prices in the range of C$50,000 - C$250,000, or even much higher. 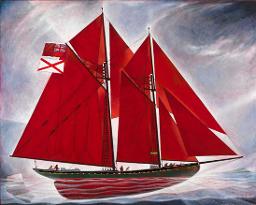 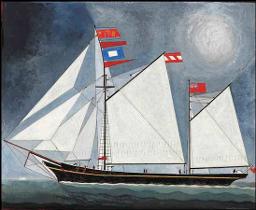 David Blackwood was born and raised in Wesleyville at the northern end of Bonavista Bay, a descendant of a long line of master mariners that plied the waters of the Atlantic from Newfoundland up to Labrador. Sealing and the cod fishery made Wesleyville a thriving fishing centre; at its height it was the home port for over 60 schooners. It is hard to believe today the stories of the richness of the seas and the struggle between man and nature in the harvesting of it which were experienced by the people of Newfoundland. From this way of life emerged close-knit communities and a long tradition of storytelling. No one has been a greater visual storyteller of this life than Blackwood, for whom narrative informs every image. He spent his summers off the coast of Labrador aboard his father's schooner, the Flora S. Nickerson, or on Bragg's Island with his grandparents, or lobster fishing around Wesleyville. Winter was the time when people gathered and filled the long nights with tales of the sailors out on the ice and sea, as well as events in the communities, and these tales emerge through Blackwood's work. Through his portrayals of events both tragic and joyous and his sensitive images of a people shaped by their environment and social conditions, we experience a deep insight into a centuries-old way of life that has largely disappeared. Circa 1983, Blackwood was painting watercolours around Newtown and was forced to take refuge from a rainstorm in the house of Elsie Barbour. There he saw a painting of the Seabird done by a local man for Elsie's father Captain Edward Barbour, and made a small watercolour from it. This was the basis for a rare group of paintings and an etching produced in 1998. Among the many stories of the Seabird is one concerning how she came to be acquired by Captain Barbour. In 1901, Barbour attended the coronation of King Edward VII as part of the Newfoundland delegation, and heard that Lord Dunraven of England, burdened by gambling debts, was selling the Seabird. This finely fitted ship had been part of the Royal Yacht Squadron at Cowes and had carried Queen Victoria to the Isle of Wight. Barbour bought it on the spot for cash. As Blackwood relates, "Captain Job Kean Barbour (Captain Edward's son) told me that his father was overwhelmed after taking the ship out for a sail. He was also tremendously impressed by the mahogany and brass fittings." The arrival of this stunning vessel in Newtown on Bonavista Bay was an impressive event. As the Barbours were involved in the cod fishery, they converted the Seabird into a working vessel and she sailed until being lost at sea in the early 1950s. In this powerful painting, the Seabird fills the picture plane and dominates its environment, leaving an impression of its magnificence. The ship's design is sleek, and the variety of its rigging, and its masts bedecked with colourful sails, is striking. The flags flown on the Seabird include the Red Ensign of the merchant navy, the Barbour house flag and the Loyal Orange Lodge flag of Newtown. Similar to Blackwood's etchings, the sea and sky have a bluish grey and grey-green radiance, capturing an atmosphere peculiar to Newfoundland. Blackwood's brushwork creates textural surfaces, particularly in the sails and the sky, where darkening clouds indicate changing weather. It is a stunning painting that communicates a sense of pride in the history of Newfoundland maritime life. In 2000, the Art Gallery of Ontario in Toronto announced the creation of the Blackwood Research Centre within the Marvin Gelber Print and Drawing Centre, which houses a large collection of Blackwood's work. The Art Gallery of Ontario is mounting a major retrospective of Blackwood's work from February 5 to June 12 of this year and has published a companion catalogue entitled Black Ice: David Blackwood - Prints of Newfoundland.

(*) Value is calculated as an average of the top oil painting sale records from ArtValue.ca database.
This information is not intended to substitute professional advice.
To estimate the value of a specific artwork created by David Lloyd Blackwood, follow some of the advice from our Valuating art page, or contact an art specialist if our automated estimate value is greater than C$2,500.