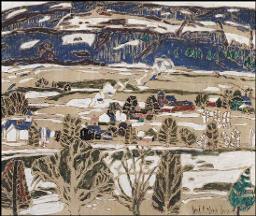 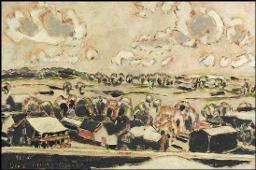 David and Patsy Milne moved to Palgrave, a village northwest of Toronto, in 1930. Like Boston Corners, it was a small town, located close, but not too close, to Toronto, and of a similar, rolling landscape, wherein the town was surrounded by hills. "Palgrave has almost as much character as B.C. (Boston Corners)," Milne wrote. "It isn't a necklace of coloured beads, more like a nest of Easter eggs...It has a railway station - about a dollar fare to Toronto - two hotels - two very small churches and an Orange hall - three stores in one of which is the post office - a harness-maker's shop - two garages - a little flour mill - one doctor - a school and very few - perhaps 20 - houses." He was pleased to have a small garden again, with some fruit trees and berry bushes, and, most importantly, an expansive, westward view. Milne's life at this time was in turmoil. The Great Depression was hard on everyone, but for an artist, who struggled to make a living at the best of times, it was a financial disaster. There was trouble in his marriage to Patsy - their only income, aside from the sales of Milne's art, were the payments that came from a cottage they had previously sold, and those were in arrears. Milne took on general labour to supplement their income, but the couple barely had enough money to buy food and pay their rent. Expensive art supplies must have seemed a frivolity. Milne believed that he needed solitude and the time to focus uninterrupted for hours at a time in order to create good work, and resentment grew between the couple. Milne has been described as an obsessive painter, but this is an understatement - he was utterly compulsive. He worked the same subjects through in repeated, yet slightly varying versions, until they were exactly as he desired they should be. His writing, too, was extremely detailed - he was as compulsive a letter writer as he was a painter, yet rarely do his letters mention his personal feelings or indicate unhappiness. Instead, they are quite joyous. He wrote in 1932, "Sunday Morning again! Here am I, one of the kings of the earth - and that's higher than any heaven I have ever seen described. If I were asked to name anything to be added to this morning's possessions or conditions I would be hard driven to do it. The mohammedan idol perhaps, some houris. No houris here, but, since they would destroy most of the joys already in my possession, I am just as well off this way." His art provided him a personal solace, and he produced an exceptional body of work at Palgrave, despite how troubled his life was.

(*) Value is calculated as an average of the top oil painting sale records from ArtValue.ca database.
This information is not intended to substitute professional advice.
To estimate the value of a specific artwork created by David Browne Milne, follow some of the advice from our Valuating art page, or contact an art specialist if our automated estimate value is greater than C$2,500.