Cornelius David Krieghoff's work could be available for sale at public auction with prices in the range of C$50,000 - C$1,000,000, or even much higher. 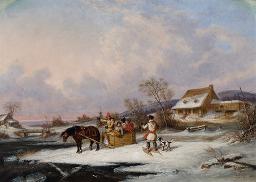 It is probably fair to say that for Cornelius Krieghoff the most important season was winter. His images of the habitants of Quebec playing, working and living their lives in a world of white, are among his most popular. The effects of snow and snowfall, so clearly seen in this canvas, suggest Krieghoff's deep understanding of his adopted home and a keen eye to what might prove to be popular subjects for his patrons, the merchants and military men of Montreal and Quebec. Krieghoff pays attention to all the details of the landscape - the varieties of trees, the grey expanse of the sky and the expanse of the road. Similarly, he has been careful to depict the costume of the hunters and details of their guns and to suggest their hardship in the snowstorm. In common with his best work, the element of narrative - here, a caribou hunt - is an important aspect of the painting. Krieghoff was aware that many of his paintings would not remain in Canada and such a scene would have an element of exoticism for a viewer in England. As it happened, a friend of the artist, Mr. James Gibb, originally purchased the work. For Gibb it probably had a more personal sense - perhaps an experience shared with the artist or a fellow hunter. Over a hundred years later the painting is, for us, a valuable record of our history and a glimpse of a lost way of life.

(*) Value is calculated as an average of the top oil painting sale records from ArtValue.ca database.
This information is not intended to substitute professional advice.
To estimate the value of a specific artwork created by Cornelius David Krieghoff, follow some of the advice from our Valuating art page, or contact an art specialist if our automated estimate value is greater than C$2,500.