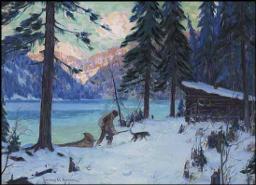 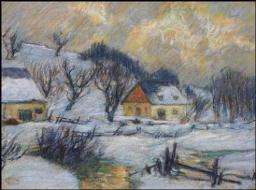 In this fine pastel, Clarence Gagnon depicts the rural countryside of Charlevoix, a painting place central to his oeuvre. Hélène Sicotte writes, "In Charlevoix county the artist found vistas where cultivated areas, transformed by close to three centuries of human occupation, alternated with stretches of wildness...With its unique topography and age-old culture, the region represented a rich aesthetic resource, and it was during these years [1908 - 1913] that he truly discovered it and used it to develop the landscape form that would henceforth define him." Gagnon's ties to Impressionism can be seen in his layering of soft pastels to capture the ephemeral effects of light and delicate colouration in the landscape. He was a master colourist, and the contrast between warm yellow and orange in the houses, sky and reflections in the creek against the cool tones of the snow is exquisite. Gagnon often used yellow in the colouration of the country houses - his rural winter canvas The Yellow House (circa 1912 - 1913), in the collection of the Musée national des beaux-arts du Québec, is a striking example of this. In The Old House, Charlevoix, Gagnon's eye rested lovingly on the harmony and beauty he saw in the relationship between nature and rural life, expressed through the shimmering effects of light and colour.

(*) Value is calculated as an average of the top oil painting sale records from ArtValue.ca database.
This information is not intended to substitute professional advice.
To estimate the value of a specific artwork created by Clarence Alphonse Gagnon, follow some of the advice from our Valuating art page, or contact an art specialist if our automated estimate value is greater than C$2,500.