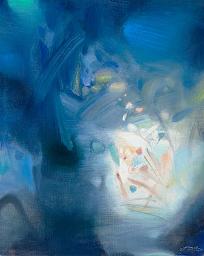 Born and raised in Xiao County, in the eastern province of Anhui, Chinese-French artist Chu Teh-Chun was one of the leading figures of the union between traditional Chinese painting techniques and Western abstraction. His grandfather, an avid art and poetry collector, transmitted his passion for art to the young Chu, who then started experimenting with traditional calligraphy and ink painting. Later, he studied under modern ink master Pan Tianshou to learn the art of caoshu, a style of calligraphy where the characters are written with one continuous line. Recognizing his talent, Chu’s father encouraged him to pursue painting at the National Academy of Fine Arts in Hangzhou, where he met artists Wu Guanzhong and Zao Wou-Ki. In 1955, Chu arrived in Paris with his wife, Chu Ching-Chao, during a time when modern and contemporary art movements were flourishing. His first encounter with abstraction was during his visit to a retrospective exhibition of the abstract painter Nicolas de Staël at the Musée National d’Art Moderne in Paris in 1956. Chu then decided to reject figurative painting and embrace abstraction fully. He drew inspiration from Abstract Expressionism, which he likened to some of the traditional techniques of Chinese calligraphy, as both had to be executed quickly and without hesitation. In Bleuté, a flurry of colours is arranged in a dramatic display of light and dark. Light radiates from the lower right centre and illuminates the darker blue tones in the background. Delicate touches of mint, pale yellow, orange and salmon burst through like fireworks, warming the whole composition. The lavish quality of Bleuté is achieved thanks to the variation of thick and thin washes of paint, evoking the energy of Chinese calligraphy and traditional Chinese ink painting, respectively. The light blues applied in transparency are evocative of clouds, or perhaps the hazy mist of mountains. The exquisite skill with which Chu handles his brush is impressive. Chu skilfully bridges traditional Chinese and Western abstraction and combines elements from both traditions. Over his career, he received international recognition and acclaim. In 1997, he was elected as a member of the Académie des Beaux-Arts, thus becoming the first Chinese member of this prestigious institution. In 2001, he was named Chevalier de l’ordre des Palmes académiques and Chevalier de la Légion d’honneur. The authenticity of this artwork has been confirmed by the Fondation Chu Teh-Chun, Geneva. This lot is accompanied by a certificate of authenticity from the Fondation Chu Teh-Chun, Geneva, signed by Chu Ching-Chao. This work will be included in the forthcoming catalogue raisonné on the artist's work.

We do not have enough information to calculate an estimated Artist Value for Chu Teh-Chun.
To estimate the value of a specific artwork created by Chu Teh-Chun, follow some of the advice from our Valuating art page.