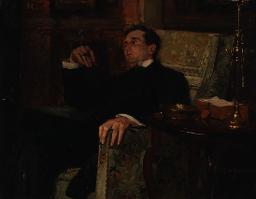 This painting comes from the collection of the well known cartoonist Henry Mayo Bateman (1887 - 1970). Bateman studied under Charles van Havermaet in London for for nearly three years, beginning in 1905. While there, the young student enjoyed the bohemian atmosphere that existed in the artist's large old house.