Charles Warren Eaton's work could be available for sale at public auction with prices in the range of C$500 - C$10,000, or even much higher. 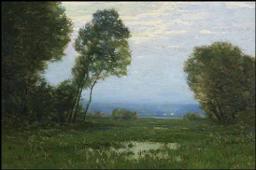 Charles Eaton studied at the Art Students League in New York, where in 1882 he met and was encouraged by the important American landscape painter George Inness (1825 - 1894). Although he struggled during his early years in New York, Eaton's work soon garnered attention from fellow artists and collectors. He was most influenced by the treatment of light and atmosphere in works by painters of the French Barbizon School and ultimately became a leading member of the American Tonalist movement. By 1900, already famous for his many paintings of the white pine trees of Connecticut, Eaton was traveling annually to Belgium and Holland, where this untitled work may have its origin.

(*) Value is calculated as an average of the top oil painting sale records from ArtValue.ca database.
This information is not intended to substitute professional advice.
To estimate the value of a specific artwork created by Charles Warren Eaton, follow some of the advice from our Valuating art page, or contact an art specialist if our automated estimate value is greater than C$2,500.