Canadian
Charles Bell is a Canadian painter.
From ArtValue.ca records, the highest price paid at auction for a watercolour work attributed to Charles Bell was C$141 - paid for "Untitled - Legislature" at Saskatchewan NAC in Regina on Sat, Jun 1, 2019.
ArtValue.ca has 2 auction art sale records for their watercolour results, with prices in the range of C$100 to C$250. 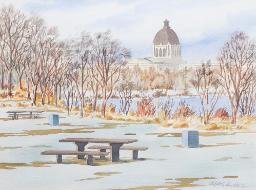 Charles Bell was born in 1916 in Portage la Prairie, Manitoba. He moved with his family to Weyburn, Saskatchewan in 1924 and then to Regina, in 1928. He took art classes at Balfour Technical School under Garnet Hazard. Bell joined the Royal Canadian Naval Volunteer Reserve and served in the North Atlantic during World War II. He rejoined the Naval Reserve in Regina after the war. Bell worked as a cartoonist for the Regina Leader-Post beginning in 1947. He worked with the paper for 35 years in a number of editorial positions, including Associate Editor and Managing Editor. He retired in 1981. Bell's watercolour paintings depicting landscapes and cityscapes of Saskatchewan have been exhibited in Regina and Saskatoon. In addition to many private collections, his work is represented in the collections of the Saskatchewan Arts Board and the City of Regina. Bell passed away in 2011 in Regina.

We do not have enough information to calculate an estimated Artist Value for Charles Bell.
To estimate the value of a specific artwork created by Charles Bell, follow some of the advice from our Valuating art page.