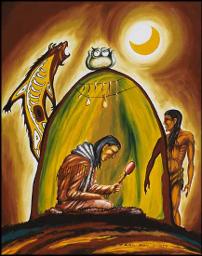 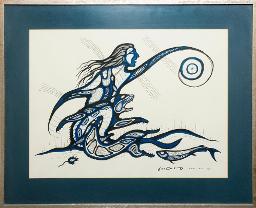 Self-taught artist Carl Ray was born on January 10, 1943 on the Sandy Lake First Nation reserve in northern Ontario. He apprenticed under Norval Morriseau (who had already achieved national and international acclaim) and worked on the mural for the Indians of Canada Pavilion of Expo '67 in Montreal. In the early 1970s Ray had the first solo exhibition of his black and sepia, Woodlands style paintings on paper and canvas at Aggregation Gallery in Toronto. By 1975, the 'Indian Group of Seven' had formed and Ray was enjoying acclaim and purchases by private collectors, as well as public institutions such as the McMichael Canadian Art Collection.

(*) Value is calculated as an average of the top acrylic painting sale records from ArtValue.ca database.
This information is not intended to substitute professional advice.
To estimate the value of a specific artwork created by Carl Ray, follow some of the advice from our Valuating art page, or contact an art specialist if our automated estimate value is greater than C$2,500.